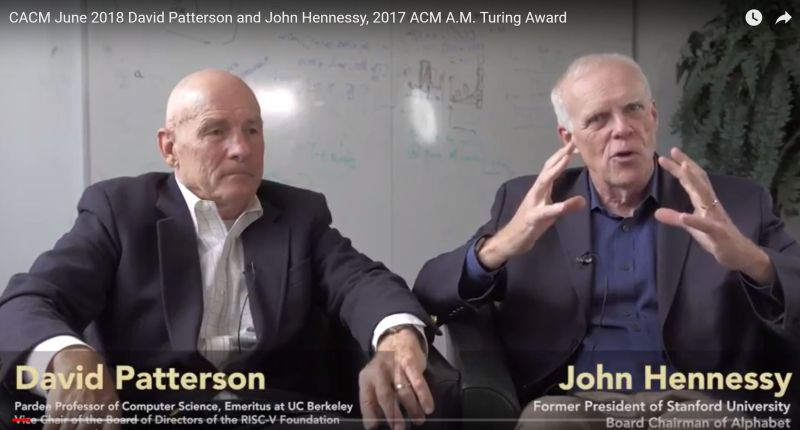 NEW YORK, NY, March 21, 2018 – ACM, the Association for Computing Machinery, today named John L. Hennessy, former President of Stanford University, and David A. Patterson, retired Professor of the University of California, Berkeley, recipients of the 2017 ACM A.M. Turing Award for pioneering a systematic, quantitative approach to the design and evaluation of computer architectures with enduring impact on the microprocessor industry. Hennessy and Patterson created a systematic and quantitative approach to designing faster, lower power, and reduced instruction set computer (RISC) microprocessors. Their approach led to lasting and repeatable principles that generations of architects have used for many projects in academia and industry. Today, 99% of the more than 16 billion microprocessors produced annually are RISC processors, and are found in nearly all smartphones, tablets, and the billions of embedded devices that comprise the Internet of Things (IoT).

Hennessy and Patterson are best known for their early research in Reduced Instruction Set Computing (RISC) but I first came across their work back in 1984 when Jennifer gave me their seminal computer architecture book Computer Architecture: A Quantative  Approach as a birthday present.  If you work in Computer Engineering, Electrical Engineering, or Computer Science with an interest in lower level systems work and don’t already have a copy of the book, you really need one. More than 20 years after getting my first copy, enough had changed that I bought the newest edition and it’s since been updated at least once more.

This book is amongst the three that have helped me most in my work life over the last 30 years:

It’s interesting that each of these have a Turing award winner as one of the coauthors. The first two books remain highly relevant today. The latter, Architecture of a Database System, was super useful for me in that it got me closer to caught up in the current database state of the art when I started working on database managements systems many years back. And, even today, it remains one of the few places where you can get many of the details and core principles and approaches taken by the major commercial database management systems prior to the emergence of open source databases. I even got to contribute a bit to the most recent edition of Architecture of a Database System.

There is no question that the RISC effort at Berkeley and Stanford continues to have massive influence on computer architecture and modern processors but, even beyond this, Patterson and his students have done a vast amount of industry leading work over the years.  Many of these projects have had a big influence over my thinking. One of my favorites was A Case for Redundant Array of Inexpensive Disks (RAID). Patterson, Garth Gibson, and Randy Katz did the RAID project.  If I had to point to the one academic project that has most influenced my designs, this might be the one. The core idea of replacing an incredibly expensive “enterprise quality” components with a set of redundant and less expensive components just keeps playing out in our industry. Anywhere we find a gold-plated hardware platform, there is opportunity to replace this system with a redundant array of high-volume, inexpensive parts. Exploiting volume economics and redundancy to produce less expensive solutions with even better reliability, availability, and serviceability is a theme that has kept me busy for much of my life and the idea is nowhere close to worn out. Patterson is unusually forward thinking, highly in tune with real industry problems, and doesn’t get lost in the weeds.

I’m usually fairly busy so it’s super hard to be able to afford to read even just the best papers much less all that is published in our field. Over the years I’ve been lucky enough to often get excellent papers recommended to me by those that really do have the discipline to plow through vast numbers of published papers. I mostly stick to reading the recommendations, but Patterson has always been an exception for me—if he writes a paper, I’ll read it. If he does a talk, I’ll watch it. So, when the 2017 Turing Award Lecture became available a couple of weeks back, I dove in.

The video is organized in three sections where Patterson does the first, Hennessy, does the second, and they both do the third and the questions that follow:

It’s an excellent lecture and well worth watching. Skip to the 6:10 point to get past the dead air and introduction: